How can we help you today?

At the last SASSIE Summit, we held a virtual auction where audience members spent virtual dollars on the proposed features they wanted the most. Surprisingly, the overwhelming winner was "Missing Shop Checker", a tool to show which locations were in danger of missing their goal.  Typical reasons include locations not being assigned to a shopper, editing falling behind,or a location having no active shop (rejected shop with no replacement, erroneous deactivation, location added AFTER session was scheduled, etc).

We should have predicted the popularity of this proposed feature because over the years we've seen far too many people MANUALLY CHECKING SPREADSHEETS against SASSIE's numbers to make sure no locations or shops had been lost - a horrifyingly tedious and error-prone process that told us something was missing from SASSIE.

But wait!  There are numerous job logs, status viewers, micro-reports, etc - why weren't these solving the problem? The more we dug into it, the more we realized that none of these tools specifically answered the questions "What locations are in trouble? What should I work on RIGHT NOW??"

We spent time working intensively with the users we saw using spreadsheets the most often, getting their feedback as we developed our new feature ... and we're finally ready to debut the first version of what we now call "GoalZ"

HOW TO USE GOALZ

GoalZ is designed to be extremely quick and easy to use, requiring no advance setup. In most cases, it's just three quick steps:

1) Select your client, date range and the desired number of shops per location

3) View the list of locations that are "In Trouble" 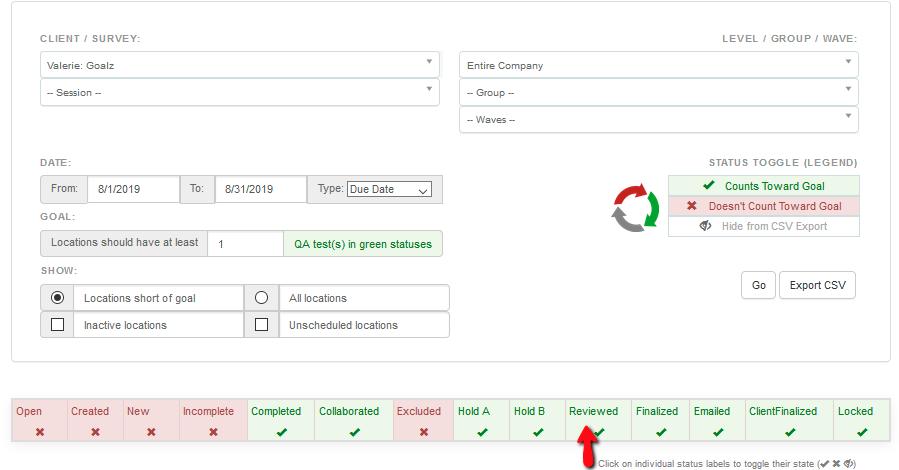 A) Enter GoalZ from one of these points: 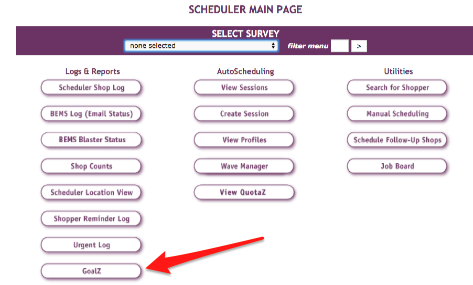 B) Select Client/Survey, Date Range and the Desired Number of Shops: 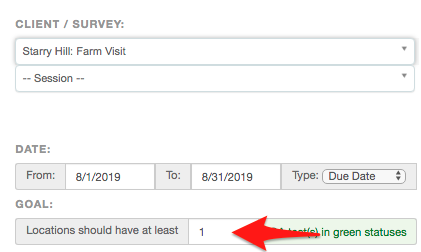 Note: Session, Level, Wave and Groups can also be specified

C) Chose what you want GoalZ to show

D) Define which statuses a location SHOULD be in to be considered "SAFE" (Green) or "IN TROUBLE" (Red).

In the early stages of a project, a location that has shops in COMPLETED or higher (not including EXCLUDED) is typically considered "safe": 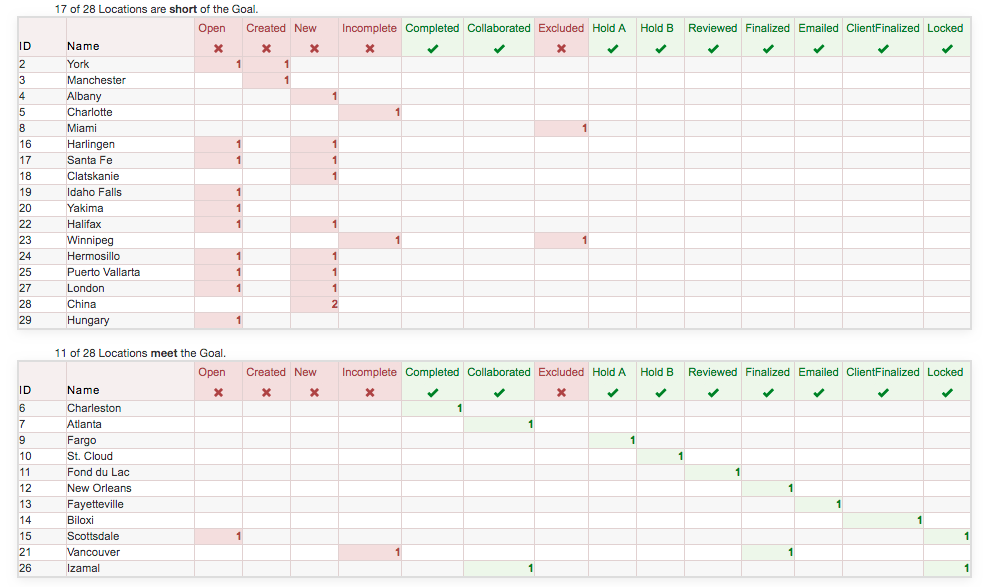 But later on in the project, you'd only want locations with shops in FINALIZED and higher (or COLLABORATED) to be considered SAFE.  To change this, simply click on COMPLETED, HOLD A & B, and REVIEWED  to turn them red:

Here's what results look like now (21 unsafe and 7 safe):

Tip:  You'll be able to export the list of locations that GoalZ displays to you ... but if some of the statuses are really useless and annoying to you, you can click until they're GRAY and they'll magically vanish from your export. Here's the clicking order:

This is just the beginning for GoalZ!  We're planning to add more features to the next version, including the ability to set different numbers of desired shops per location (and save them as a "Custom Goal") but are certainly open to suggestions for how to make GoalZ an effective time-saver (and maybe CLIENT-saver)!

Did you find it helpful? Yes No

Send feedback
Sorry we couldn't be helpful. Help us improve this article with your feedback.
Back to: Solution home Sassie Features